President Uhuru Kenyatta, President of the Republic of Kenya and Commander-in-Chief of the Defence Forces on Monday led the country in a public viewing of the body of the late retired President Mwai Kibaki at Parliament Buildings in Nairobi.

The Head of State was received at Parliament Buildings by Deputy President Dr. William Ruto, Chief of the Defence Forces General Robert Kibochi, Speakers of both houses, Service Commanders and other senior government officials. 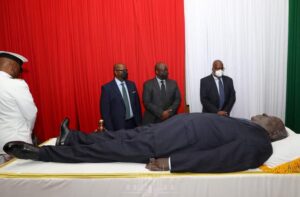 The body of the late retired President Kibaki had been wheeled on a gun carrier escorted by a military convoy from Lee Funeral Home to the National Assembly, earlier in the morning, where it shall Lie in State for three days.

Senior government officials and members of the general public viewed the body of the late President Mwai Kibaki, the third President of the Republic of Kenya, to pay their last respects. 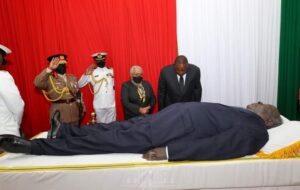 The former President shall be accorded a state funeral and his remains interred in Othaya, Nyeri, on Saturday with a 19-gun salute from the military. This will follow the requiem mass that will be held at Nyayo Stadium on Friday.