A young girl who was denied form one admission one year ago in Nandi county due to albinism has secured a coveted life skill development training at the Karen Contemplative Retreat Centre in Nairobi.

Winnie Jelimo from Koisolik village in Nandi county was denied entry in five secondary schools due to her skin condition despite her exemplary performance and in a twist of events while she was almost giving up ,her plight was highlighted by Dr. Henry Rotich a government officer working with the Kenya Bureau of standards.

Jelimo through the support of Jubilee nominated senator Isaack Mwaura, who is also Chairman-Albinism Society of Kenya,and the Kenya Education Program managed to secure a slot at Kapkenda Girls High School where she is currently enrolled with her entire tuition fee catered for.

Jelimo On Wednesday could not hide her joy after her first maiden air trip to Nairobi where she will be attending a life changing training opportunity in discovering her talent,

“I picked her at the JKIA airport 45 minutes after boarding a flight from Eldoret where she was escorted by her father Samwel kipruto and a host of other young boys and girls from Koisolik village who were ecstatic about Winnies experience , she now joins the coveted Karen Contemplative retreat center , this is a rare opportunity that will develop her personal skills as well as get linkages to mentorship programs “Said Dr Rotich.

Mr Simon Munyao a programs officer at the Kenya Education Fund says the training will major on academic guidance, talent actualization, self-awareness ,effective communication and character development skills among others.

Her father says the once lost hope ,is now an inspiration to many young children in Nandi County and more so those living with albinism, “I did not envisage in my dreams that my daughter could come this far, she had hopes of becoming a doctor and a judge drawing her inspiration from judge Mumbi Ngugi,and I have no qualm that her dreams are become a reality with every single day,She continues to inspire many children living with albinism not only in Nandi County but country wide , I would urge parents to give equal opportunities to all our children despite their perceived disabilities “says Samwel. 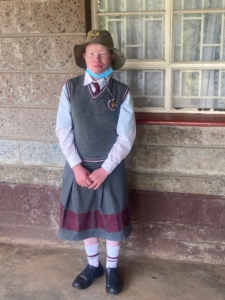 Dr Rotich who continues to render unrelenting support to children with disabilities in his rural home of Nandi County, says disability is not inability and that such children should be supported to actualize their dreams,

“I wish to thank senator Isack Mwaura who has been consistent In fighting for the rights of people living with disability and more so those living with albinism, through his support and that of the Albinism Society of Kenya and the Kenya Education Fund we are now seeing more children with albinism getting the necessary support to advance their career,“Noted Dr rotich.