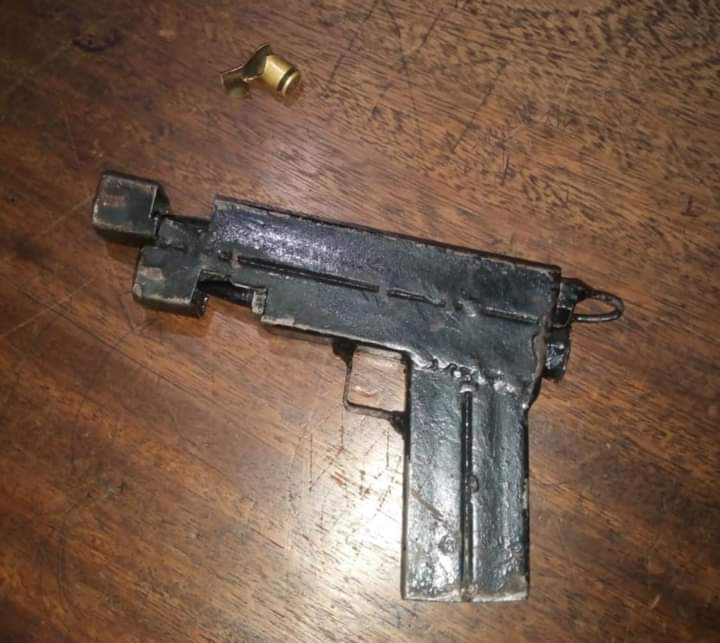 A thug who attacked a man at gunpoint is nursing gunshot injuries, after the victim he had attacked snatched his home made firearm and shot at him, missing his vital organs by a whisker.

Three thugs on a motorbike had accosted one Simon Sanga, before one of them seized his mobile phones, money and other valuables and staged a dramatic escape in the early morning incident in Njiru, Nairobi county.

Earlier, Sanga a Tanzanian national had travelled from the neighbouring country to see his fiancé in Mihang’o, Njiru sub-county. After spending sometime together, the two lovebirds decided to go out at around 2am, and crown the night with refreshments.

They drove their vehicle to Top Five pub, but unfortunately on arrival they discovered that its doors were shut. Sanga left his fiancé in the car and went to knock on the pub’s door, just incase the attendants hadn’t left and were still inside.

As he was knocking, a motorbike carrying two pillion passengers suddenly screeched to a halt and one gun toting young man leapt from the bike training the firearm’s muzzle at Sanga, ready to pull the trigger at the slightest provocation.

Sanga, hurriedly emptied his pockets and gave the thug his mobile phones, ATM cards, car keys and Sh27,000 in cash. The other two thugs waited animatedly on the bike as the rider revved its engine impatiently, ready to speed off immediately their accomplice brought back the loot.

But as fate would have it, their long wait was rewarded with the sound of gunfire, as Sanga snatched the firearm from the thug who held it precariously, since he was struggling to carry the four phones he had acquired, ATM cards and the Sh27,000.

As the hunter now became the hunted, the villain left his firearm with today’s hero and jumped on the bike that had now moved closer to save his skin.

Sanga, who had never come across a firearm managed to squeeze one spirited shot at the thugs, as their bike vroomed onomatopoeically from the scene, leaving a thick cloud of dust.

Detectives and police officers based at DCI Kayole, visited the scene and recovered one spent cartridge of 9mm caliber and a jersey that Sanga had undressed the suspect as he took flight. They also recovered the firearm from the victim and discovered that it was a homemade firearm capable of firing.

Droplets of blood were also visible at the scene indicating that the assailant had taken a dose of his own medicine as they fled.

An operation to apprehend the suspect is currently underway, with crime scene detectives employing forensic investigation techniques, to unravel the identity of the assailants.

Meanwhile, DCI thanks Sanga for his bravery but cautions anyone who has been attacked by armed assailants, to be careful before engaging them as they could endanger their lives more.