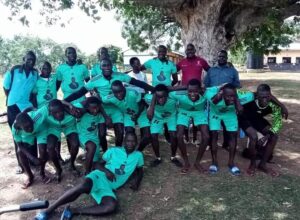 Busia Governor, H.E Sospeter Ojaamong’s donation of a full set of uniform to Akolong FC from Teso North Sub County has raised the morale of players.

The team is participating in the Football Kenya Federation (FKF) Teso North Sub Branch League that is entering the seventh week this weekend with 17 teams taking part.

Until the Governor’s intervention through Ojaamong Foundation, the club was contented with torn jerseys which they have been putting on while honoring their matches which is being played on round robin basis.

The Sub Branch Chairman, Victor Ochakala who handed over the Jerseys to the club at Akolong Primary School during their training thanked H.E Ojaamong for the donation.

” The new outfits is a big boost to the team which should now strive to register victories to escape relegation at the end of the season,” he said.

Akolong was identified by the chairman as the most disciplined and determined team which has promised to revamp their ambitions of playing at Branch level next season.

Akolong FC are currently lying in position 14 on the log with five points from six matches. They have won one match, drawn two and lost three.

Kang’elemuge FC are topping the league standing with 13 points from six matches, having won 4, drawn 1 and lost one. Pool FC tie on second position with Kabkara and Homeboys but are ahead on goal difference.