As Muslims from all walks of life flocked to Mosques to celebrate Eid-ul-Fitri, a group of Muslims in Eldoret town organized lunch for over 600 people from a poor backgrounds.

The group of Muslims who organized the lunch asked Kenyans to let love prevail and help those who are less privileged as a way of thanksgiving and ensuring that Kenyans embrace the spirit of sharing and giving without looking at their religious differences.

Led by the Council of Imams and Preachers of Kenya (CIPK) Uasin Gishu Chairman Sheikh Abubakar Bini and businessman Hassan Kosgei thye said their move was to help the less fortunate in the society.

“Our aim is to feed the children who live off from remains of the dustbins so that enjoy and join other Kenyans in celebrating Eid-Ul-Fitri since they are also Kenyans and deserve to be treated well. We also fed orphans and widows who cannot afford even a single meal per day,” said Bini.

“We want them to feel part of us. I urge Kenyans at large to help the less fortunate as a way of thanksgiving and ensuring that Kenyans embrace the spirit of sharing and giving without looking at their religious differences,” added Hassan Kosgei. 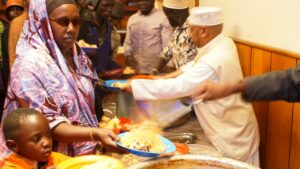 “I Urge politicians to play politics in a peaceful manner since whoever will win is a Kenyan and who will lose is also a Kenyan we want them to have a memorandum so that the one who lost should respect the winner and vice versa,” he said.

“Leaders should instead avoid incitive words and preach peace and sell their manifestos instead of dividing Kenyans based on their political or tribal affiliations,” Kosgei said.

Kosgei warned politicians against attacking president Uhuru Kenyatta saying he has done a lot for the Country and he needs to be respected.

John Mwangi one of the beneficiaries thanked the Muslim clerics for remembering the less fortunate in society. 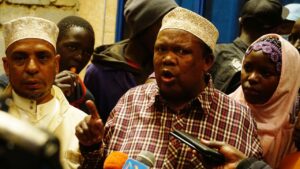 “We want to thank Muslims since thye don’t discriminate against one based on their religious affiliation because there is no one who was denied food and may God bless you. President Kenyatta should help Muslims since they are not selfish and thye will share it with the less fortunate,” he said.