Huruma Ward Aspirant on a UDA party ticket Lucy Njamba has stepped down in favour of James Maina Wachira.

Speaking to the press in Eldoret town Njamba says Maina is the best candidate to lead the people of Huruma.

“After allot of soul searching and listening to that ground today I have decided to step down in favour of James Maina Macharia in which he is the best candidate to lead the Huruma ward people to the next level,” she said.

Wachira has declared his interest for the Huruma Ward seat which is current being held by Lucy Ngendo Chomba who was elected on a Jubilee party ticket.

She will also be seeking to retain her seat.

Njamba called on Kenyans to maintain peace before, during and after the fourthcoming August general elections.

“Whichever side you be contesting kindly let’s maintain peace since we don’t have any other country yet voting is a one day affair,” she added.

James Maina Wachira thanked Njamba for believing I his leadership saying he not let her down.

“I want to thank my mother Lucy Njamba for accepting to step down on my favour, I didn’t not coarse of force her to support my bid but it’s through her own will. I want to promise the people of Huruma that if you give me a chance I will not let you down, ” Maina said. 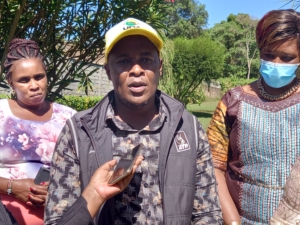 He said once elected he work round the clock to ensure that the lives of Huruma Ward residents are transformed.

“I will be your servant and not leader and I will listen to everyone whether you voted for me or not just to make Huruma great,” he added.