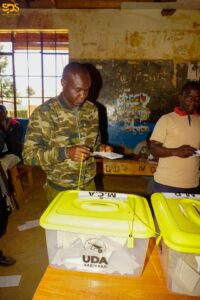 The UDA chairperson of the Rift valley region Collins Chemenjo has assured aspirants that the Moiben parliamentary seat UDA primaries will be free and fair.

Speaking to the press he said that ballot papers and boxes have been dispatched to various parts of Moiben Constituency in Uasin Gishu County.

“We have ensured that we gave enough materials to the presiding officers and the security personnel. Everything has started well as planned and we hope that by 5pm in the evening everyone could have voted, “said Chemenjo.

Chemenjo also noted that the results will be announced at the polling station once the voting exercise and tallying is complete.

He called on residents to turn in large numbers and vote for their preferred candidates.

The Moiben Constituency UDA primaries were repeated after thye were marred with irregularities that led to the nullification of the results.

UDA is also conducting UDA Party primaries in Karuna Meibeki and Kimumu Ward which were also nullified due to irregularities.

The county returning officer Ann Wanjiku warned that there will be repercussions for those who are planning to cause chaos and bribery during the nominations.

“We have enough security so that those who are planning to cause chaos, will be dealt with accordingly. What we want is to ensure that the party primaries are conducted in a free and fair manner as advocated by our party leader none other than William Samoei Ruto, “warned Wanjiku.

Amon Kemboi one of the said the nomination process began earlier unlike before and he’s expecting things to move swiftly.

“The polling station was opened very early in the morning and everything is going on smoothly and we hope that this election will be free and fair and the leaders that we voted for are the ones who will be announced,” said Kemboi.

By Caren Masika and Shalodi Chebet